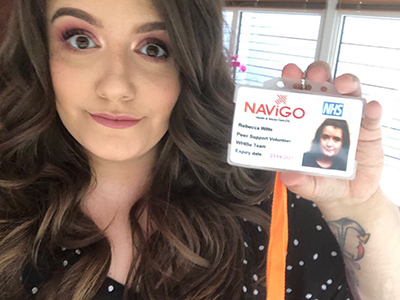 "I was introduced to Anthony Ackroyd and the WHISe team when I began taking Clozapine.

I was very unsure about starting on the medication but, after talking with Anthony and having his reassurance, I was willing to try it. Anthony is the Clozapine nurse for the area and works alongside myself and others taking Clozapine.

When I first started taking the medication, I had weekly blood tests for 18 weeks and then for the next year, I was checked every other week. I would speak with Anthony during these appointments – something I believe was fundamental to the success of the medication. I have now been on Clozapine for nearly two years, and see Anthony on a monthly basis for blood monitoring.

During this time, I also met Jeanette Williamson – an assistant practitioner and member of the WHISe team.

Anthony and Jeanette provide a holistic therapy looking at all aspects of health and wellbeing in the services they provide, highlighting the importance of physical health alongside mental health issues.

Everything is tailored to a person’s circumstances, which was invaluable to me while struggling with mental health issues.

At the start of 2018, Anthony approached me and two other service users with the idea of starting up a WHISe-run Supporting Voices group, where people with voice-hearing specific diagnoses could meet up. I myself was very unsure about this idea.

Would it be something similar to what you regularly see on TV and in films? A group of people sat in a circle, taking it in turns to hold their hand up and say, “I’m Becky and I’m a voice hearer” – is that what it would be like?

Once the group was set up, it took Anthony a few weeks to convince me that it wouldn’t be like that.

The first time I attended, I was very nervous but entering a room full of strangers was made a little easier by knowing I had the support of Anthony and Jeanette, who were both there.

After a year of the group running, I can say the people I met are now my friends.

The group is a safe place for us to talk about our mental health experiences and anything we are going through or struggling to deal with. Whatever we say, it’s always met with lots of help and support from my peers.

However, incidentally, the topic of mental health doesn’t come up all that often. There is so much support for each other in the group. We are like a family.

We recently invited Tom Hunter, the NAViGO chair, and Jane Lewington, the chief executive, to come and visit the group and see what we do.

It was great to tell them about how the group has had such a positive impact on the lives of people who attend. It was a proud moment to look at how far the WHISe team has come, and the feedback we had was amazing.

Through the success of the Supporting Voices coffee morning, we have recently set up another coffee morning called Everyone’s Welcome, which is open to anyone accessing NAViGO services.

We are hoping it takes off as well as our Friday group. Last year, I also attended WHISe Choices – a 12 week course that looks at the importance of physical health alongside mental health.

The course covers everything: from healthy eating and the different food groups to the importance of exercise and how medication can affect our relationship with food.

At the start of the 12-week course, Anthony and Jeanette take base line bloods to look at things like blood sugar and cholesterol, and also use a body analyser which measures weight, hydration and visceral fat.

After six weeks, there’s another body analysis to see if anything has improved and then again after 12 weeks. There’s also another blood test to see if blood levels like blood sugar and cholesterol have improved. After the 12 weeks, my baselines dramatically improved.

The WHISe team also run two physical activity groups. The first is a walking group around our local park.

The group is well attended and caters for all levels of fitness. Some service users walk around once and then go to the café, while others complete several laps. From my Fitbit, I can say we roughly walk around two and a half miles in the hour session.

The other group we run is a badminton session every Friday. We have a range of abilities that come to play, everything from skilful to beginner – like me!

I feel it is important at this stage to say that all the groups created and run by WHISe are unfunded, which is testament to the team. It would be really exciting to see where these groups and other projects would go if some funding was available.

Attending these groups has changed my life. Through interaction with others, I have boosted my confidence and my own self-worth.

I have had the opportunity to help in the recruitment of new support workers for the WHISe team by being on an interview panel.

I volunteered on the WHISe team stall at the NAViGO AGM, where I had the opportunity to speak to lots of people within the organisation.

One of my proudest moments since working with WHISe was the opportunity to accompany Anthony and another service user to the University of Hull and speak to 40 third-year mental health students.

I spoke about my mental health journey – both the good and the bad. It was such a liberating feeling to be able to speak openly about my own experiences and know that I could positively influence the care of other people within mental health services.

I love the way the WHISe team work and the ethics behind everything it does. The importance of good physical health – alongside mental health – in providing holistic personalised care is important to me, as I am a qualified adult nurse. However, due to my own mental health, I had to leave my job.

If it wasn’t for the support I have received from the WHISe team over the last two years, I wouldn’t be where I am or have the confidence to do what I am now doing.

I’m honoured to say that I am now a member of the WHISe team myself having become a peer support volunteer – the first within any community team."

This story was first published in September 2019. Rebecca has since gone on to become a fully-fledged staff member!