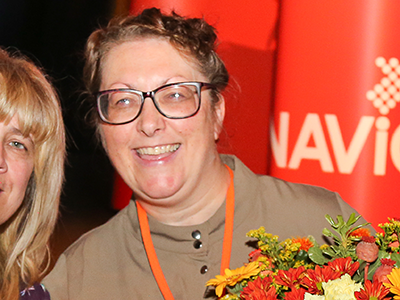 "After I completed my BA Hons and Masters in English Studies, I believed that was it for my studies.

The Master's was particularly difficult as I was also caring for my partner and daughter – who have complex and challenging needs between them – at the same time. I was one of NAViGO’s elected community representatives between 2015 and 2019, and I still attended the NAViGO Membership Board and the other commitments that I had signed up for as part of the role despite these challenges.

But, after a break of a year, I guess the realisation dawned on me that, yes – maybe a career in nursing or teaching would be a possibility.

My eldest daughter, Autumn, had just qualified as a staff nurse at Sheffield – a true inspiration as she was a young carer from ten years old. Looking back, I had survived and pushed myself through previous years of study and I was still standing.

I discussed with my partner and daughter about what I wanted to do next. I explained that whatever I chose to study at university would be full-time for three years – depending on if I was good enough because there were only 49 places. They told me to go for it and they would support me.

So, I applied for a Mental Health Nursing course at the University of Hull and had an interview.

Just to be clear, I have absolutely no nursing background. My knowledge and experiences are only from my caring role and looking after my partner and daughter.

When I unwittingly became a paramedic when my partner had taken overdoses.

When I became a psychotherapist for my daughter when she self-harmed.

When I became a nurse when my partner was overcoming alcoholism and addiction.

The good news is? The University of Hull accepted me."

OUR MEMBERSHIP
PLACEMENTS
HEALTH PROFESSIONALS
GO BACK TO YOUR STORIES