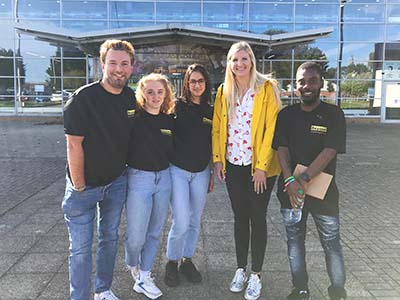 Rebecca joined us as we hosted our Annual General Meeting and celebration at Grimsby Auditorium, demonstrating best practice, new projects and achievements in mental health services.

NAViGO head of corporate affairs Julie Gray said: “We’re delighted Rebecca joined us for our annual celebration, particularly as we are celebrating our tenth anniversary year – it was good to hear more about her personal journey.

“We use our AGM to remove stigma and change perception of mental health by inviting high profile guests to speak of their experiences.

“It’s really important to show that everyone’s personal mental health can be affected at any time.”

Following her success at the Beijing Olympics, Rebecca was thrust into the spotlight and following her retirement in 2013 makes regular TV appearances offering commentary and analysis on her beloved sport most recently covering the Tokyo 2020 Olympics.

Away from the pool, Rebecca undertook the challenge of staring on ‘I’m a Celebrity…Get Me Out Of Here!’ where she faced a barrage of social media abuse attacking her personally.

Since this surfaced, she has become a role model to people who might be suffering through internet bullying, supporting others who may be facing similar issues.

Meeting staff and touring NAViGO sites, Rebecca commented on how impressed she was with the innovative services provided: “It’s absolutely incredible – the staff, the facilities – just everything. I’ve never ever been to any mental health services before so to see it first-hand has just been incredible and totally not what I expected.

“The facilities are so fantastic.”

Rebecca wasn’t the only familiar face making an appearance.

Mental health campaigner Jonny Benjamin MBE – whose social media campaign with Rethink to #findMike, the man who talked him out of jumping off a bridge when he was suicidal, went viral – also made a welcome return to NAViGO to speak about Beyond – the young people’s mental health organisation.

NAViGO’s AGM - bringing together staff, service users, carers, partner agencies, community and other NHS trusts – was held at Grimsby Auditorium but the live stream can be watched again here.

Julie added: “After the last year, it’s been a good opportunity for us to take stock and say a massive thank you to our staff but more importantly look to the future.

“We want to continue improving and developing services for the people of North East Lincolnshire so we can support them in their mental wellbeing.”

AGM 2021
OUR MEMBERSHIP
GET HELP
GO BACK TO OUR NEWS